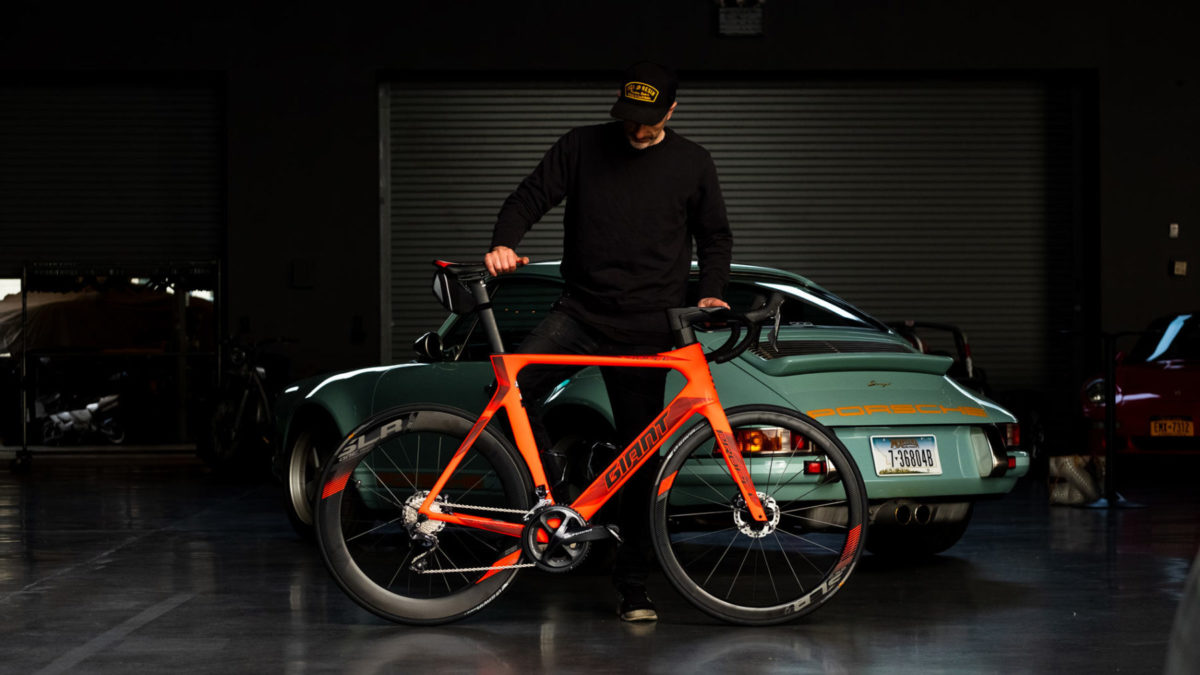 One of the perks of sharing Pier 76 with the Classic Car Club Manhattan is getting to demo each other’s gear. Our friend and CCC Director Mike Prichinello took one of Roula’s Giant Propels for a test spin, and wrote about his experience on the CCC’s blog. Read his review below, and check out Roula’s other available bikes here.

At Classic Car Club, all things are combustion powered. Take, for instance, the Classic Car Club Cycling Team—a group of self-flagellating men and women that enjoy waking up before sunrise to break a sweat on bicycles. So when our friends at Roula, a cycling rental resource for discerning riders worldwide, set us up with a bicycle from their New York fleet, the cycling team was more than happy to give it a flogging.

Enter the Giant Propel Advanced Disc aerodynamic racer that I took for a 20-mile spin around Central Park’s demanding loop, as well as to the welcoming streets of Manhattan.

While Giant has been making fine bicycles for years, they’ve never set themselves apart as beautiful. But this newest iteration of Giant’s Propel Aero line is quite the looker. A new graphics kit speaks of speed and the matte, “neon red” paint job (I prefer to call it “hyper orange”) not only looks tremendous but gave me a new level of confidence that his raw carbon daily cycle doesn’t provide while slicing through hurried cabs around Columbus Circle during twilight hours.

The other thing that stands out about the new Propel is its Bauhaus, minimalist form. Internally-routed cables, a streamlined, proprietary headset, disc brakes (more on these in a bit) that remove the clutter of rim brakes and recessed hardware present more of the negative space than that of the bicycle itself. Pair all this with a set of staggered rim sizes front and aft and sharp, airfoil shaped tube construction, and the Propel presents itself as a rubber-melting missile.

Comfortable. Without going through a fitting, I grabbed a steed the same size as my t-shirts – medium. With a little adjustment of seat post height and a fiddle with the seat position on the rails, a snug fit was found. The rise of the bars was easy on my shattered back, the wing-shaped bars provided a sturdy and tactile feel in the cockpit. The Contact saddle, though hard as a rock, was ergonomically correct.

Once clicked into the Look pedals and with a few revolutions spun, it became quickly obvious just how stiff a ride the new Propel is. Every ounce of power input was instantly turned into forward motion. On the flats, the aero shaped frame and wheels provide a very stable ride. While the wheelbase is a very traditional geometry, it felt longer than normal – smoothing out the jittery, edgy feeling a lot of carbon-clad racing bicycles serve up. On the East side of Central Park’s loop, where the elevation changes smoothly roll and sway, the Propel begged to be clicked up a gear and be pushed. The Shimano Ultegra crankset and cassette responds well too. Very gentle inputs will put the derailleurs to work sending the chain back and forth with plush shifts that have little impact on the pedal stroke and cadence, though the front derailleur did have to be further encouraged a few times to complete the shift.

Heading further north and into the fast East Drive downhill that encircles Lasker Rink, the Propel was in its element. The bike stayed positively planted while peddling hard through the downhill and it leaned in with confidence for the apex of the corner, piling on the speed. The 42mm SLR 1 Aero front wheel kept steering precise at speed as it cut through the wind like the keel on a sailboat. A few clicks down the gears kept momentum moving for the upcoming and far less fun of Harlem Hill, an aggressive incline that brings the rider to the West side of the park heading south. The Propel stayed sharp on the climb and put power down efficiently. Out of the saddle, the Contact SL Aero bars provided a comfortable grasp of the machine and the frame served up no discernable flex while powering hard through the pedals. The bike feels efficient when climbing.

Back to those brakes. Hydraulic disc brakes are not often found on an aero whip but that day, I was glad they were there. While traditional caliper brakes provide more than enough stopping power in most cases, these 140mm Shimano Ultegra hydraulic affairs give not only stopping power, but a handful of feel as well. While sprinting at more than 24 miles an hour past Strawberry Fields, a duo of women finished with their morning walk decided it was time to cut west, right in front of my path. I was able to apply massive stopping power and I actually locked the front and rear wheels but with miniscule modulation on the brake levers, I was able to keep the front from washing out and the rear from coming around until the women scurried, giving me a small hole to aim for. I pointed toward the gap and released the brakes to thread the needle and escape calamity. This was the shining moment for the Propel for me. If I was on my own caliper-shod bicycle, I don’t think I would have been able to apply that level of finesse to the brakes to control the high-speed situation so smoothly.

Overall, the Giant Propel Advanced Disc left me with gear envy. It translated pedaling to speed with little drag, inspired confidence in the downhills, and made my climbing feel more efficient. $3,775 for a bicycle may sound steep to some, but it pays with performance.