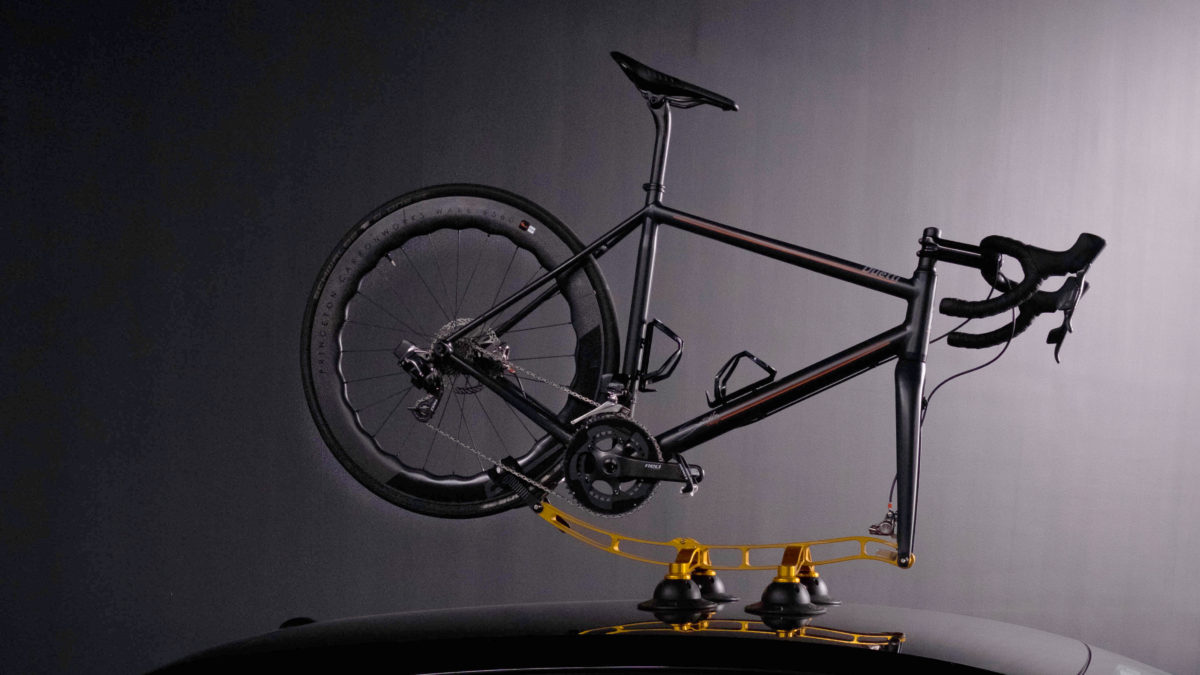 One of the perks of sharing Pier 76 with the Classic Car Club Manhattan is getting to demo each other’s gear. Our friend and CCC Director Mike Prichinello tried out set of Princeton CarbonWorks’ Wake 6560 wheels, and it was love at firsts ride. Check out his review below, and stay tuned for ways to demo the wheels on Roula bikes.

“I’m not racing”, I told myself. “I’m just riding.” Living exclusively in a rarified, Classic Car Club world makes it easy to be spoiled. Spoiled by gear, science, high-tech toys and componentry. The easy availability of carbon fiber missiles, Italian race machines and all manner of go-fast miscellany can spoil a person. It can make one forget their grounding.

Having known this, for some reason or another, I drew the line of reason at carbon fiber cycling wheels. This was a bridge I thought too far. My forged aluminum wheels carried me and my Felt AR3 carbon fiber race bike hundreds of miles across the flats of Long Island and over the steep peaks of the Adirondacks and all places in between. Carbon wheels just made it easier, and where’s the suffering in easier? I wasn’t competing for position, but rather I was stacking on miles with the Classic Car Club Cycling Team. “The harder the better”, I thought, so I denied myself a good set of wheels. I had drawn a red line. A red line a guy named Paul Daniels obliterated.

Paul is a very nice guy with a massive enthusiasm for whatever you’re enthusiastic about. Luckily, my enthusiasm is about going very fast on two wheels, powered or otherwise. Being the co-founder of a plucky startup called Princeton CarbonWorks means Paul and I share the same passion. Enthusiasm explosion.

You can guess where he studied, you’d actually be wrong though. He went to Oxford, natch, but he and the other founders all met rowing for the US National team – based in Princeton. You can also guess that Paul went into finance after his Ivy League education. You could have also guessed he found the world of finance a total bore. So he did what any successful entrepreneur would do – picked up sticks and started his own thing. This thing of his, as it turns out, is to build stunningly strong and light cycling wheels that happen to be achingly beautiful as well.

Princeton says something about a person. Perhaps it says they’re intelligent. Or that they row. Paul rowed, as a matter of fact. He’s smart too. It may also say they’re deck shoe enthusiasts (not sure if Paul is), but it mostly says they work hard. They don’t take easy routes. This is true about Paul too. As a cyclist, Paul was looking for a little more speed and a little less weight. He wanted to go faster for longer and he was reaching the performance envelope of the equipment available. One place that seemed ripe for development was cycling race wheels.

In the world-class pelotons, carbon fiber is as common as cramped calves. But despite its prevalence, in the case of wheels, carbon fiber isn’t happy being both round and elliptical. This is actually one of its weaker shapes. Add to that a spoke piercing its surface every few millimeters, and you’re left with a fragile shape that also happens to be one of, if not the most, important component on a racing bicycle.

So Paul and a team of nerds got to work. For the better part of five years, they experimented with shaping carbon, shaving weight and searching for thousandths of seconds while trying to lose as many grams. They got familiar with wind tunnels and spoke to the fastest on two wheels.

The result of their labor is the exquisite Princeton CarbonWorks Wake 6560 Wheelset.

First, let’s talk about the weight. To hold one of their wheels, complete with tubeless tire and hub is astonishing. It’s antimatter in your hand. It’s weight is barely detectable. When you’re through inspecting it, it’s best to tie it down so it doesn’t float off. At just 1495 grams, the Wake 6560 is 200 grams lighter than the Zipp Firecrest 404 – the industry standard in the category.

But it’s the shape that grabs headlines. Regular circles are boring. When in the form of a carbon wheel, they’re also very fragile and only moderately good at carving through the air cleanly, as a racer strives to. Enter that crazy, wavy shape of the Wake 6560. This shape accomplishes a few tasks. Varying in depth from 65 to 60mm (ah! Now the name makes sense), a new level of strength is met, as the extreme weight and pressure exerted by the spoke is now spread over stronger sinusoidal oscillations or waves -24 in all. Perhaps more importantly, that zigzag profile acts much in the same as a diffuser stuffed under the rear of a hypercar. As the vehicle travels through the wind and air, the spinning wheels create turbulent vortex shredding areas behind them. The shape of the Wake 6560 smooths that air and creates calm flowing air behind the wheels, replacing the miniature tsunami that can be found in the center of the bicycle frame and behind the rear wheel of traditionally-shod bicycles.

The result is a smoother, faster ride with 120 grams of drag, compared to about 128 grams of more traditional wheels, in this case again, the Zipp 404.

That’s all well and good on paper, but what is the Wake wheelset like on the road? 32 miles on my home testing ground – the Central Park loop at 6:30am told the story. The scenery was the same, but the ride transformed, as was my understanding of science. And it still is. The first lap was an easy lap at moderate speed to engage cardio and onboard energy reserves, rather than the sugars in the morning juice. At slow speeds, I could tell something was different. The wheels were silent. I was making less noise than a Tesla. Things felt streamlined and less twitchy. The nervousness left the frame of my bike.

Lap two brought with it speed. On the flat rollers of the east side of the park, I noticed my energy output was low, but my speeds were high. I was rolling at three or so miles faster than my average of 20mph and doing so with much less effort. The Wake 6560s were creating massive momentum, despite their weight – a phenomenon I had a hard time wrapping my head around. How could something so light create such rolling momentum? It was if one of the park workers threw a line to me from his truck and pulled me around the park. With each pedal revolution, more power stacked on and the bike and I went faster and faster. As we approached my favorite part of the loop, the fast downhill that wraps Lasker Pool, the awesome rigidity and stability of the wheels came into play. This downhill section requires a left hand to right hand change of direction while descending at a fast clip. Typically the bars get very nervous as I pedal through in the heaviest gear, but the Wake 6560s ironed it all out. The stability in the corner was unexpected and awesome, allowing me to carve a deep line like a pizza cutter through a pie at Speedy Romeo’s.

The best news? Not only are the Wake 6560 wheels lighter and stronger than the competition, they’re cheaper too. You can have a set of clinchers for $2,400. Throw in a few more for Chris King hubs or a disk brake set up.